In 1962 Alan Lovell wrote that the ‘anarchist cinema’ was ‘immediately relevant to our world of power states, mass murder, torture, protests and revolts’, an observation that is as true today as it was then.

The difficulty comes in defining this ‘anarchist cinema’. This is a problem that people like Lovell, and most notably Richard Porton, and a small handful of others, have attempted to resolve. My own study into the subject resulted in me writing the imaginatively titled The Anarchist Cinema (Intellect, 2019). In this book, I argue that cinema is an inherently capitalist artform, and so finding unambiguously ‘anarchist’ films made within the institution of commercial cinema was, if not impossible, bound up with contradictions around need to generate profit, as well as a film’s conflicting and varying ‘message’. Interpretation of any film differs according to the point of view of the person watching, the time it was made, the ideological stance of the filmmaker, or any other factor that could affect how we understand a film. Therefore, hardly any film can categorically be said to be this ‘ism, or that ‘ism. It is most often just a matter of how any individual decides to interpret what they see in any given moment. (There are exceptions of course. Not many would content that The Eternal Jew, for example, is anything other than virulently anti-Semitic. That was the point of it, after all.)

In The Anarchist Cinema, I argue that while commercial cinema contains these paradoxes, those interested in anarchism could still engage with mainstream films by looking at moments within them, rather than as a whole, and noticing moments that exemplify anarchist theory, or even by enjoying inspiring depictions of on screen ‘anarchy’. Ultimately, any anarchist notion of cinema would take into consideration the distinction between film as individual object, and the institution of cinema as a broader cultural enterprise that combines capital, industry, artistry, and a multitude of different fan responses. I argue that something can become part of an ‘anarchist cinema’ if it is used to help conceive of or conceptualise anarchism. This might be a commercial film that contains anarchist imagery, art films that propagate an anarchist message (even if for only part of its running time), and individual moments that can be co-opted for an anarchist cause. Any of these can even include material that is contrary to anarchist theory, but which can be used in support of a particular point or argument.

Jean Luc Godard once said that making political films was not the issue. What was the issue was to make films politically, meaning that the process of production and the experience of viewing has to deconstruct and create possibilities beyond depicting political events or making an argument in narrative form. With this difference in mind, one wonders what counts as ‘political’ film today. How will cinema respond to the sort of political upheaval witnessed over the past week in the USA, where citizens have protested, demonstrated, and rioted against continuing police brutality and the murder of George Floyd by uniformed police – captured, as is increasing the case, on camera by onlookers? Mainstream films inspired by this awful crime and its aftermath will undoubtedly contain positive messages. These imaginary future movies may even stir up anger and be used to dictate future social policy (though this would be unusual). But I make the claim that if films based around these events and those like it are to have genuine political relevance, they cannot just attempt to replicate what has happened so as to affect an emotional response in the viewer. Nor can they do so by merely recreating the methods by which these events have been conveyed to the world, namely by mimicking the thousands of hours of mobile phone footage capturing what is happening first hand.

For cinema to have political relevance it should not only subsume the aesthetic influence of the vibrant and terrifying footage shot by nearby citizens and which we are consuming on social media, but find some way to successfully incorporate the actual footage as well. It should also find some way to credit those who have produced the images. Because it is no longer medium specific, film cannot just rely on replicating the world using its traditional methods, used to direct emotions and reveal information in ways that create a ‘satisfying’ viewing experience. No dramatisation can do justice to that which has happened to George Floyd or the ever increasing numbers of people like him. Nor can a film do justice to the understandably angry response of citizens that followed, if it relies on singling out (possibly fictionalised) individuals and weaving tragic or inspiring stories designed to create our empathy with the protagonists on screen. Our knowledge and understanding of this method of narrativising softens any real world relevancy of the message, because we understand it as a ‘Hollywood’ technique. Films that do this are part of the history of cinema, not part of the fabric of political and social developments, and so we contextualise them differently when watching.

This does not mean that only documentaries can respond to the sort of happenings and uprisings we are seeing. Fictional and dramatised versions can find ways to utilise the actual footage shot by protestors and bystanders as part of their narrative, but should do so by accepting that the citizens who shot the footage are also actual creative filmmakers, and not just as collectors of raw material for ‘proper’ or ordained filmmakers to do what they want with. These citizens using their cameras have, after all, contributed to our collective memory and understanding of events not only by being in the right (or wrong) place at the right time, but also by selecting what to shoot and when, and by shifting angles and altering framing by which to create the maximum impact for viewers. They also sometimes provide commentary on what is happening, with full awareness of the possibilities for interpretation and misinterpretation. The importance of citizen shot footage to journalism is now fully accepted. Is there potential for a similar acceptance within cinema?

There are, of course, forerunners in these developments. Spike Lee, for example, demonstrates the importance of real world imagery within fictional narratives or dramatisations of historical events in films like Do the Right Thing, Summer of Sam, and BlacKkKlansman. There are almost certainly other directors I am unaware of who do similar or even go further than Lee. The question moving forward is how will citizen filmmakers be credited, financial or otherwise, for their contributions. Also, how will the rights of those captured in the footage be protected in terms of their privacy and personal safety.  I do not yet know the answer to this, beyond directly compensating the creator of every clip utilised or somehow getting every face seen in the clip to sign a release form. But if commercial cinemas (including not just the often unfairly maligned ‘Hollywood’, but the often just as derivative commercial cinemas of many other nations) cannot find ways to compensate and collaborate with the very people who are creating how we view the world – those who are documenting these events often under extreme stress, and while sometimes putting themselves in danger for a greater cause – then perhaps cinema should stay away from attempting to profit off the back of them. 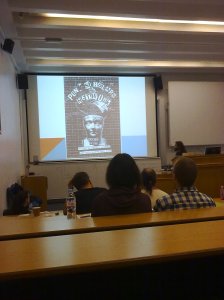 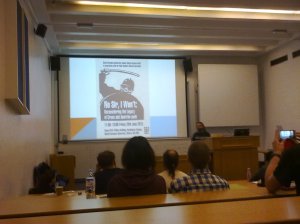 Here is a link to my essay on the Nunsploitation cycle published in Offscreen film journal.
http://offscreen.com/view/nunsploitation

Abstract: In an era of renewed critical appreciation of Italian genre/exploitation cinema (such as Austin Fisher’s Radical Frontiers in the Spaghetti Western) there is one cycle of films where any appreciation appears to be absent: the Nunsploitation movie. These films, set in convents where a nascent lust bubbles just under the surface, examine themes of feminism, radical left wing politics, and the role of the Church and religion in society. This paper examines the way two films, The Nuns of Saint Archangel, and Flavia, the Heretic, tackle these issues through their mise en scene and narrative structure.